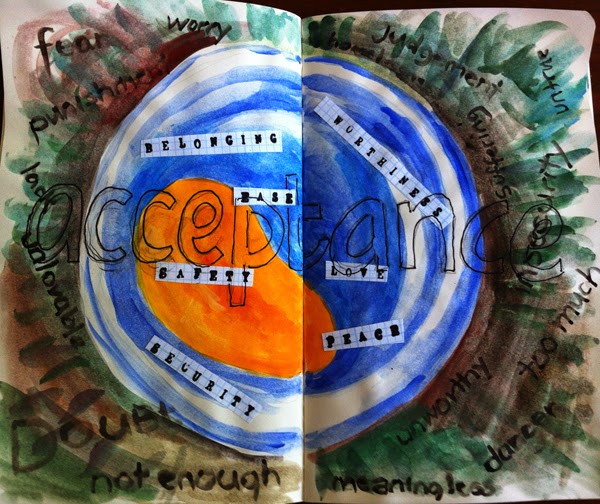 I avoid painting at night.

In the dark, the colors inadvertently get muddy, the contrast gets all flattened out, making it difficult to tell where one thing ends and another begins.

But for this piece, I watched the sun set beyond the trees at the seminary down the street, it’s last rays momentarily blinding me with their grasping light through the western studio windows. I decided to keep on.

I was struggling with it anyway, wrestling with the forms that I so wanted to keep in the dark: fear, doubt, worry, danger… all the “UN” words… UNworthiness, UNloved — the exact opposites of my dreams and desires. But is it really so binary? Black and white? Shadow and light? Inside and outside?

One of the very first exercises I was given in my freshman drawing class was the relationship between positive and negative spaces; the rendering of one defining the other. Is it the same with worry and ease, unworthiness and worthiness, doubt and certainty? It seems rather obvious and simple but truly… what is one without the other? What would happen to my experience of ease if every one of my days were spent sipping mai tais by the pool?

It’s a common exercise in the self-development circles these days, to clearly delineate between what you want and don’t want. To know. To be certain what’s inside and what’s outside of your boundaries. That was my intention when I started this mini-project and shared it with you. But what do I inadvertently lose when I put up a hard edge against perceived danger? And is there something I gain from embracing it all? When the contrast gets all flattened out… all of it begins to seem like part of one big thing.

I’ve been struggling so much lately with acceptance — accepting that what I want to run from could turn out to be a blessing. And that trying to sift out what I want from what I don’t want could be a form of trickery and manipulation on my part. That in fact, there is no form not shaped by it’s shadow.

It all starts looks the same in the dark.

I read this quote from Janet Connor: “To feel really safe, you must first step out into the unknown, experience fear, and discover all is well.”